We met up with Megan Pascoe who is contending for the 2012 Paralympics, she’s living in Portland and says that ‘in all weather Portland is amazing’

The Race is formidable and the bay is a natural amphitheatre, I can’t think of many better places to go sailing. its not tidal so its not so much about navigation and local knowledge, as just sailing

We’d already heard locally that she’d had a big impact on the schoolchildren she’d spent time with, particularly one little girl who also had cerebral palsy.   She’s very down to earth and has no qualms abot being very upfront about her disability:

I call myself ‘spastic’ because that’s what I am

Talking about sailing as being a male dominated activity she mentioned that the team was 80% men, and that it’s very unusual to have two women contenders for the team.

A lot of women leave sport when they leave school but then on the flipside of that some of the men in the team are doing a mens only pilates class.

She also raised the point that ‘old boats – like the Falmouth working boats are too physically demanding for women to sail and that traditionally to have a woman on board a boat was thought to be unlucky’. Even though she travels a lot spending as much as 9 months away from home she thinks of Portland as her base. Talking about the Olympics she said that ‘sailing isn’t really a spectator sport, even when you’re sailing you can’t see whats going on,

a lot of waiting for the wind, that’s sailing… a good book and a set of playing cards helps. 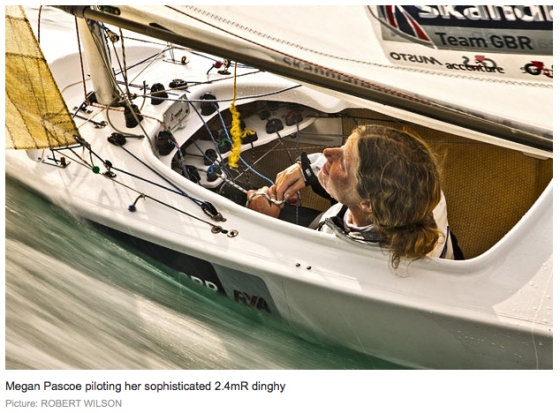 I don’t think Portland will change – It’ll be an amazing summer.

Portland comes from working communities, If you can survive the winter, you know you’ll be alright.

other projects by us